Here’s a neat write up about the founding & incorporation, early days and ongoing history of The Children’s Home Society of Virginia, which enjoyed our 119th birthday on Wednesday!

The Children’s Home Society of Virginia was organized in 1899, and chartered by the General Assembly on 30 January 1900. Inspired by the work of the National Children’s Home Society, it was born of concern on the part of its founders for the plight of abandoned and neglected children. As stated in its charter, the Society’s goal was “finding family homes for homeless, indigent, or dependent poor children in the State of Virginia, and other purposes incident thereto.” 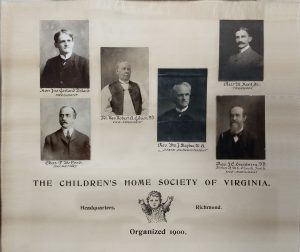 The Board of Directors selected John Garland Pollard (future governor of Virginia) as the Society’s first president and the Reverend William J. Maybee as state superintendent. Maybee, who was to hold that position for nearly 30 years, articulated the ethos of the Society when he wrote in 1903 that “We are not to imagine that children of humble birth are therefore inferior, on the contrary the homeless child of the street is of the same clay as the petted darling of the wealthy…Both Christianity and civilization may be quite correctly measured by their treatment of childhood.” 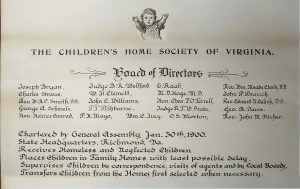 The Society received children in one of two ways, parental placement or court commitment. Representatives of the CHS traveled the state gathering children who were made wards of the Society and brought them back to Richmond. The children then underwent “a thorough system of renovation” that included the provision of “clean and comfortable garments,” basic etiquette training, and examinations by medical and psychological doctors.

Initially, wards were placed under the care of Rev. Maybee’s wife, Mary McLeod Maybee, and the Belle Bryan Day Nursery. In 1905, the Board purchased a house at 2605 East Franklin Street to serve as a receiving home and central office; another receiving home was opened in Roanoke in 1920. Local advisory boards around Virginia handled much of the recruitment and screening of foster families, and helped monitor foster placements. Those children who were never adopted remained the responsibility of the CHS until they reached adulthood, became self-supporting, or married. 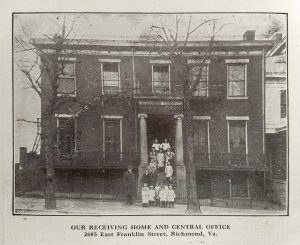 Change came to the Society in 1926 when it joined the Child Welfare League of America and began a process of reorganization based on League observations. Their recommendations touched on a variety of areas including fire safety in the receiving homes, hygiene, nutrition, record-keeping, the manner of disciplining the children, the selection of foster homes, and other topics. One major adjustment resulting from the study came with the shift to a staff of trained social workers.

With its budget coming entirely from donations (and, starting in 1930, from the Richmond Community Fund), the Society struggled financially in its early years. By the early 1930’s it was in danger of closing under the weight of $50,000 in debt. Led by then-Governor John Garland Pollard and other prominent supporters, the state-wide “Spring Emergency Campaign” of 1931 yielded enough funds to erase the Society’s debt and bring a measure of financial stability. The Society later partnered with the United Way for several years as an additional source of funds.

The receiving home was closed in 1934, signaling the Society’s move to an emphasis on temporary boarding home (foster) care in advance of permanent adoption placement. As the state became increasingly responsible for the protection of poor, abused, and neglected children, the Society found its niche in the placement of “children born out of wedlock of the higher middle classes, who…are not accepted by their families.” Throughout the middle part of the century, the Society only took in infants under six months of age who were deemed “essentially normal,” which included “the child with some physical problem who can nevertheless bring great happiness to his parents-by-adoption.” 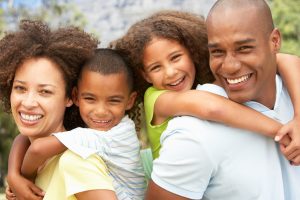 In the 1970’s the Society began defining itself as an agency providing adoption services, pregnancy counseling, and foster care. It also started to accept children over the age of six months, and to place children of minority and mixed-race backgrounds. The 1980’s and 1990’s saw an increase in the Society’s work with “hard to place” children, including babies with medical problems, older children, minority children, and sibling groups. This work led to the formation in 1998 of the Partnership for Adoptions (PFA) program. In a cooperative effort between the Children’s Home Society, local departments of social services, and clinical professionals, PFA seeks to “train and prepare adoptive families to parent children with special needs.” The success of the program has been honored by the National Association of Counties (2000) and with an Adoption Excellence Award (2003) from the United States Department of Health and Human Services.

While the Roanoke office and branches in other areas of the state have closed, the Children’s Home Society of Virginia remains vital and forward-moving in its second century of service, with offices in Richmond and Fredericksburg. (Up-to-date as of 2010).