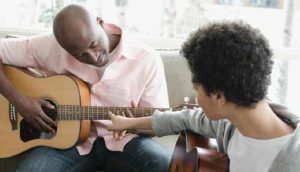 I don’t think I’m the only man who’s uncertain about what it means to be a dad.  The role seems less well-defined than that of a mother.  Generally, a mother is there to comfort you when you get hurt, to cook something special for you, or to fawn over you when you do something praiseworthy.  (Apologies to the ladies reading this if they feel stereotyped.)  But what does a father do?

Having only parented one child — and when I became his parent, he was already fifteen years old — I can only really talk with any experience about what it means to be a father to a young man.

I think of myself in relation to my son as someone to measure himself against — and not necessarily just in the physical sense, although that can be fun and healthy too.  (He outweighs me by quite a lot, and the one wrestling match we attempted was over quite quickly.  Let’s just say that I was not able to pull off the upset.)

Instead of physical conflict, my son measures himself against me when we argue.  Arguments, though they are to be avoided if possible, can also be instructive.

When my son argues with his adoptive mother, he is complaining about her decision.  He is begging to be let off easy.  He is asking to be treated, not as a man, but as a boy who deserves leniency.

When he argues with me, he is asserting himself.  He is forcing an issue just to see where he stands.  He is demanding to see what I am made of — so that he can see what he is made of, too.  He is asking to be treated, not as a boy, but as a man, and as an equal.

He is still not there yet, though.  Though he is now legally an adult, it will be a few years yet before I can truly acknowledge him as a fully grown man.  He still has a lot to learn, and a lot of catching up to do to be equal with peers his age.  When he does get there, though, I will be immensely proud, and I will know that my primary job as his father is complete.