For the last several months, we have been writing blogs centered around our history. We started with the year we were chartered, 1900, and have since written blogs detailing our advances during the 1910s and 1920s.

Each decade has its own feats, and the 1930s are no different.

Below, we discuss the crushing debt the Society owed during the 1930s, almost being shut down by creditors, and how the Society was able to not only overcome these obstacles but come out stronger than before.

The Children’s Home Society of Virginia always finds ways to persevere, which has given us hope during these last few months. Because of our unwavering commitment to the work we do, we have always fought to overcome any challenge we have faced. Even though we are in difficult and uncertain times now, we have hope that we will find a way to pull through and continue serving Virginia’s at-risk and vulnerable youth to the best of our ability.

When Mr. Preston became the superintendent of The Children’s Home Society after the resignation of Mr. Maybee, he also assumed the role of the head of the financial department. Wards had been growing rapidly, and therefore, the agency had not been able to keep up. At the end of April 1929, the excess of expenses over income was $16,560.07.

During the 1930s, debt continued to pile up due to bad economic conditions. Owing $50,000, creditors threatened to close the Society.

Despite these obstacles, the staff proved to be loyal and demonstrated extreme steadfastness. With all the financial troubles, the staff continued on, despite being offered different jobs, because of the faith they had in the work they were doing. 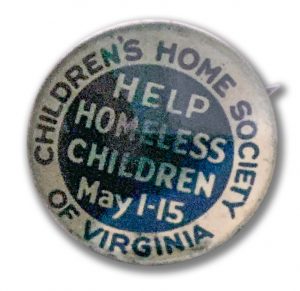 During May of 1931, under the leadership of Governor and CHS founding director John Garland Pollard, Alexander Weddell, and E. Lee Trinkle, a state-wide effort was made to raise the outstanding $50,000 to permit the Society to continue its work.

This campaign was the first planned by the Society. A carefully selected list of wealthy citizens in each community was created for all surrounding communities.

At the end of September, the Society was entirely free of debt! For the first time in years, this placed the Society on a firm financial foundation. This was a monumental moment for the Society because its work was never before so great.

The total financial report for this year shows:

During 1931, while the Society was getting on the right track, other aspects of the financial department were changed, too, which made for a more solidified and concentrated effort.

From this year on, a planned campaign was held every year for a few weeks.

Beginning January 1, 1930, the Society was a member of the Richmond Community Fund.

Founded in 1911 as the Council of Social Agencies, the Richmond Area Community Council coordinated the city’s many private social welfare organizations.

“Although our participation in the Fund has undoubtedly resulted in decreased giving on the part of some of our out of town friends, who do not understand that only a small part of our needs are met by this amount, we feel that time and publicity will remedy this situation and we will profit by participation in this great partnership of social agencies for community and understand and support in Richmond.”

In 1960, the Richmond Area Community Council and the Community Fund merged to create the United Givers Fund, which continued to act as a centralized fundraising mechanism for Richmond’s private social service organizations. Other name changes included the United Way of Greater Richmond and the United Way Services. Today, the United Way now focuses on improving community impact, coordination, and capacity.

Mr. Preston arranged with the Board of Directors to offer three fellowships to graduate students at the School of Social Work at the College of William and Mary. At the end of their course, they joined the Society’s staff.

Children’s Home Society of Virginia was one of the first of its kind to initiate such a plan, just one of the lasting innovations that demonstrates our penchant for trailblazing.

Support Virginia Adoption | Donate to a Good Cause

Our Society has always needed financial support from people like you in order to continue doing the important work we do. Since 1900, we have served more than 14,500 children and families in Virginia, but we could not have done it without our community’s help. More than 75% of our support comes from generous supporters like you.

Not only do we facilitate private adoptions, but we also specialize in finding permanent homes for harder to place teens or children with physical or emotional challenges, often due to abuse or neglect.

Your support makes it possible for us to find safe, permanent homes for older children and teens.

Every dollar makes a difference in the life of a child.

Below are the costs for a handful of our services and what your money would buy:

There are several different ways you can give, which include Matching Gifts, Planned Giving, contributing to the Wish List, and more. View all the ways you can donate here.

Right now, there are nearly 1,000 children waiting for an adoptive family in Virginia, and during these uncertain times, we need you now more than ever.

Our Chief Advancement Officer, Bruin Richardson, wrote about how the coronavirus crisis affects CHS and what you can do to help.

“CHS’s mission is to build strong and permanent families and connections that will help some of our most vulnerable children and youth thrive in the years to come. But we can’t fulfill that mission without you. As the Commonwealth faces a looming budget shortfall, the funding for our Foster Care Adoption and Post Adoption programs is in peril. Our major fund-raising event, celebrating our 120 years of service to the children, youth, and families of Virginia has been postponed. Major funders have understandably repurposed some of their support to basic needs that are so crucial right now. But those whom we serve need us now more than ever.”

We would greatly appreciate it if you considered donating to us and supporting Virginia adoption and our vulnerable youth.