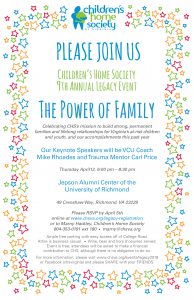 Recognizing the Power of Family

April 12, 2018  | Jepson Alumni Center of the University of Richmond

Click here to fulfill your pledge or make a donation…thanks! 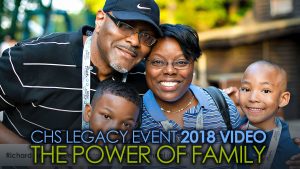 Click here to watch the Power of Family video, and find out what “family” means to our special adoptive families!

The impassioned theme of this year’s annual fundraising gala, “The Power of Family,” was evident in two key-note speakers, our guests, a video developed just for the event, and even in the decorations. Ultimately, however, the Power of Family was demonstrated in the outcome of the event, which surpassed our fundraising goal by over 50%. For that, all of us at CHS wish to thank our supporters, sponsors, volunteers and of course our CHS adoptive families, all of whom celebrated and contributed to the Power of Family on a beautiful April 12th evening at the University of Richmond campus.

Our guest speakers were two remarkable men who have integrated the Power of Family into their personal and professional lives. Mike Rhoades has been the coach for the VCU basketball program since 2017, and spoke of the importance of treating teammates and other collegial relationships as family, in order to facilitate the mutual respect and trust required for success. He was followed by Carl Price, a childhood trauma survivor and mentor who relayed his own experiences and the notion that family comes in many forms and should never be taken for granted.

Our four programs were represented in booths that were eagerly visited by guests hoping to win a valuable hand-crafted rug donated by W. Hirsch Oriental Rugs. In the spirit of the night, the winning couple donated their prize to one of our attending adoptive families!

This year’s event included a special tribute in recognition of our Legacy Society Members past and present (click here to view them.)

If you missed the event, consider making a donation to support our amazing programs and families…click here!

More about our keynote speakers:

VCU Coach Mike Rhoades
After a playing career at Lebanon Valley, Rhoades accepted his first coaching job at Randolph-Macon in 1996 under Hal Nunnally; at just 25 years old he was promoted to head coach. He would go 197-76 in 10 seasons, reaching four NCAA Division III Tournaments and two Sweet Sixteens. Rhoades then served on Shaka Smart’s staff at VCU with four-straight NCAA tournament teams and the 2010-11 Final Four squad. In 2014, Rhoades was named the head coach at Rice University. Rhoades engineered a turnaround of the Rice program…his third year record of 23-12 was the second-most wins in program history. On March 21, 2017, Rhoades was named the head coach at VCU. More on VCU Coach Mike Rhoades 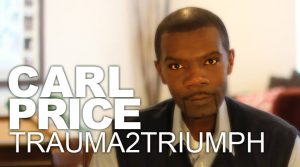 Trauma Mentor Carl Price
Carl is a former foster child, a cancer survivor, and a US Navy Veteran. He had the honor to speak before a US Senate hearing on Childhood Trauma and provides training on Childhood Trauma and Complex Trauma. Additionally, Carl has mentored youth who are in foster care and those who have aged-out of foster care. Carl is an adviser and helps many organizations develop a broad perspective and backgroundin areas of trauma, foster care, community organizations and more. “I am able to help others because I too have faced struggles and have learned how to win.” www.carlmprice.com