Child welfare has been a large part of the overall welfare program for as long as we can remember, starting with the realization of social needs. Over time, children have become increasingly more important in the minds of interested and responsible people.

The Children’s Home Society of Virginia was founded as a result of both outside influence from the National Children’s Society and the number of neglected and abused children who needed care in Virginia.

Since the creation of CHS in the early 1900s, we have been a pioneer in allied fields of care for neglected and abused children.

January marks our 120th birthday, and we couldn’t be prouder of the work we have accomplished. It is our hope that we continue helping at-risk youth for the next 120 years, too.

Each month we will be writing a blog about our rich history, detailing every decade. This month, we kick things off with the 1900s. Keep reading to learn about child welfare progress, our founding, earliest leaders, and principles that still ring true today.

A New Era of Hope for Child Welfare

CHS was founded at the turn of the twentieth century and opened a new era of hope for child welfare and the future of neglected and homeless children of Virginia.

In late 1899, Reverend D.W. Comstock came to Richmond at the request of interested citizens to organize a society that helped neglected children.

The legislature of Virginia passed the act to incorporate our society on January 30, 1990, with the purpose of finding family homes for homeless or dependent, poor children.

Upon our founding, children were taken into CHS’ care if their parents or guardians had passed away or could not provide a safe environment for them due to alcohol, drugs, abandonment, mental health issues or other similar reasons.

November 23 and 24, 1900, marks the first and second meetings of CHS. Both were held in the parlor of the Young Men’s Christian Association. At the second meeting, the constitution and by-laws were presented and accepted.

These by-laws included detailed information about:

Reverend William J. Maybee was elected secretary pro tem during this time. A board of directors and a ladies auxiliary board were also elected.

Mr. Maybee’s primary job was to find homes for homeless children. However, since a lot of work had to be done to advertise and publicize the organization, Mr. Maybee traveled often to deliver sermons and speeches. By the time of the second annual meeting, Mr. Maybee had also organized thirty-four local advisory boards throughout Virginia.

The children who were brought to Richmond were put in the care of Mrs. Maybee at the Belle Bryan Nursery. But, that building soon became overcrowded. On June 8, 1905, a house at 2605 East Franklin Street was purchased as a receiving home. Mrs. Maybee was in charge of the children and was assisted by members of the Ladie’s Auxilliary. The children who were in great need of medical care were treated for free by local doctors.

During this time, country homes were the most desirable for placing neglected children.

“The society believes that by placing children away from bad influences, it is ensuring a normal childhood.” –Mr. Maybee

Wealthy homes were the second most desirable.

As of May 1902, children had been taken into foster homes by people of the following occupations:

In the span of five years, 115 children had been adopted.

A couple of his standout messages from the annual report of May 1903 that still ring true today are as follows:

“We are not to imagine that children of humble birth are therefore inferior. On the contrary, the homeless child of the street is of the same clay as the petted darling of the wealthy.”

“Neglected children are not necessarily bad children. They are bad simply because they have been made so by their surroundings and training. Over 90 percent of these children are bright and healthy.”

“There is no work so important or so grand and noble in its results as that for little children.”

“Money invested in child saving will yield a greater return than any other form of philanthropic expenditure.” 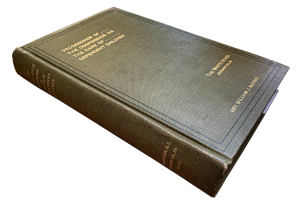 During the early 20th Century, individuals working to improve the lives of children in the United States faced many challenges. Despite the hardships, policymakers and organizations broke ground as the decades progressed in passing new laws and initiatives that supported children and their wellbeing.

Seven national White House conferences revolving around children and youth catapulted much of this work. President Theodore Roosevelt hosted the first conference in 1909, which Mr. Maybee attended and was inspired by.

President Roosevelt’s White House Conference on the Care of Dependent Children in 1909 was designed to raise public awareness and address children’s issues, including the deleterious effects of institutionalizing dependent and neglected children.

President Roosevelt, along with 200 conference attendees, offered nine proposals concerning the use of institutional care for dependent and neglected children. Conference members emphasized the importance of family and home life and incorporated this ideology into their proposals, including the establishment of a foster care program, formation of the federal Children’s Bureau, regular state inspections of foster care homes, and education and medical care for children in foster care.

“The society believes that the best possible place for a child is in a good home. Acting upon this principle, good family homes have been found for these children where they will have the comfort, training and influence of real home life. It thus uses the divinely basal institution of society — the family. The child is thus placed in its normal environment, the home, where he or she receives normal development and when maturity arrives, he or she enters the business and social activities of life without shock or difficulty.”

Stay tuned next month as we delve into the 1910s!

Since Children’s Home Society was chartered in 1900, we have had the joy of serving nearly 15,000 Virginia children, youth and families.

Virginia is ranked practically last for the rate of children aging out of foster care. Currently, there are nearly 1,000 children waiting to be adopted in the state of Virginia.

These waiting children are:

If you’re considering adoption, you’re in the right place. There are many different ways you can grow your family through adoption, and CHS would love to help.

CHS is dedicated to finding permanent adoptive parents for children of all ages throughout Virginia and to providing ongoing post-adoption counseling to maintain successful family relationships after the adoption has been finalized.