With the House and Senate coming out with their budgets this coming Sunday, we’ve had a lot of movement of some of the bills we support in Senate Finance and House Appropriations this week! Here’s a quick update on some of the bills that have progressed further through the legislative process so far this week.

The Senate Finance committee has shown great support for issues relating to foster care and adoption in their committee meeting yesterday. They passed three bills unanimously! Two of those bills are patroned by Senator Reeves: SB1253, which would require local departments of social services to freeze the credit of children in foster care and SB1339, which is the omnibus bill that incorporates many of recommendations of the JLARC report on foster care. Additionally, Senator Mason’s bill SB2014, which aligns our laws with the Family First Preventive Services Act to allow Virginia to use federal funds to prevent children from entering foster care, passed unanimously. All three of these bills were passed with a financial contingency clause, meaning they still have to be funded in the Senate’s budget. We’ll know more when the Senate announces its proposed budget this coming Sunday. 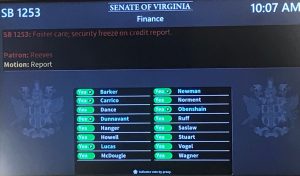 The House has also shown support children in foster care and youth who have aged out. HB1730, patroned by Delegate Brewer, which is the companion bill to SB1253 mentioned above, passed House Appropriations unanimously. This is the bill that would require local departments of social services to freeze the credit of children in foster care. We are thrilled to see support on this from both the Senate and the House. Additionally, HB2350, patroned by Delegate Miyares, which would require all public higher education institutions to provide a grant for tuition for youth who have aged out of foster care, passed House Appropriations unanimously. Both of these bills will still have to be funded in the budget. We’ll also know more about this once the House announces its proposed budget on Sunday.

We are thrilled with the momentum and support of legislators to improve how Virginia supports children in foster care and youth that age out.

To stay up to date, register below to get email alerts as we post updates from the General Assembly!