We’ve wrapped up the second to last week of session and have some big news! Some of the bills we support have passed both the House and Senate and are now waiting to be signed into law by the Governor. For the bills that have not yet passed both chambers, there’s still another week for those bills to make it through the General Assembly and head to the Governor for signing. Here’s an update. 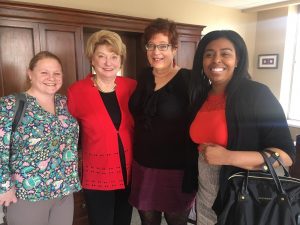 The Credit Freeze Bill (HB1730/SB1253), patroned by Delegate Brewer and Senator Reeves, has passed both the House and Senate! It still needs to be funded in the final budget but the bills themselves have passed both chambers! This bill will require local departments of social services to freeze the credit of children in foster care. We are grateful to all of the legislators that supported this legislation that will help prevent the abuse, fraud and misuse of children’s credit.

The Families First Preventive Services Act Statutory Alignment bills have passed both chambers as well! HB2014, SB1678 and SB1679, patroned by Delegate Peace and Senator Mason, are waiting for the Governor to sign them into law. These bills will position Virginia to access federal funds to prevent children from entering foster care. This is something we’ve never been able to do before and will allow Virginia to provide services to children and their caregivers while remaining with their family, rather than entering foster care. It will take some time to fully implement this legislation but this is a huge first step into transforming our child welfare system!

The Foster Care Omnibus Bill, SB1339, patroned by Senator Reeves, is still being worked out in the budget. We are hopeful the Budget Conferees will recognize the importance of implementing many of the JLARC report recommendations and fund this legislation in the final budget.

HB2350, patroned by Delegate Miyares, which would provide free tuition at all four year higher education institutions for youth who have aged out of foster care, is still in the Senate. It needs to pass Senate Finance and the full Senate before it would go to the Governor to sign into law. We are hopeful over the next week that this bill will make it through the full legislative process and become law.

It’s been a busy session but we’ve had a lot of successes! We will keep you updated over the last week of session and give you a final update at the end of session with which bills make it through the full legislative process and become law.  Sign up below to get email alerts as we post updates!