We are thrilled to see so much progress towards helping youth in foster care and youth who have aged out of foster care this General Assembly session. Here’s a brief update on some movement we’ve seen since our latest post.

SB1339, patroned by Senator Reeves and known as the Foster Care Omnibus bill, passed the Senate unanimously on Friday. In addition, over the weekend, the Senate released their budget and included funding for this bill. We are grateful that our legislators have viewed the JLARC report on the state of our foster care system as an opportunity to improve. We know that this is just the starting point for improvements and there will still be a lot of work to do in the coming years but are thrilled to see this momentum and commitment to helping children in foster care. 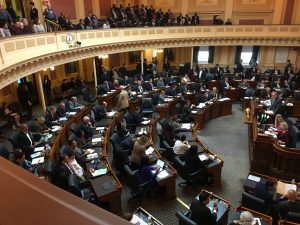 Yesterday, the House and Senate came out with their proposed budgets. Both chambers included funding for many of our priorities including HB1730/SB1253, the Credit Freeze bill patroned by Delegate Brewer and Senator Reeves respectively, and funding for the implementation of Family First Preventive Services Act. Next steps are for the House and Senate to work out any differences between their budgets.